The ancient Sumerian mother goddess Inanna has a complex history and a wealth of attributes which perhaps indicate her extreme age and longevity. Inanna was the goddess of war, combat, justice, and political power as well as love, beauty, sex, fertility, and desire. Her symbols were the lion and eight-pointed star, she was associated with the planet Venus. Inanna bargained with the lords of the underworld to retrieve a loved one, like Demeter; she stole the container of positive and negative aspects of civilization, like Pandora; like Juno she flew into divine rages and killed rivals. Inanna gradually merged with the sky goddess Ishtar; she was an influence on the Phoenician goddess Astarte who influenced the development of the Greek goddess Aphrodite.  It is recorded that Inanna was worshipped in parts of Iraq until the eighteenth century.

Photo: Fragment of a stone plaque from the temple of Inanna at Nippur showing a Sumerian goddess, possibly Inanna (c. 2500 BC)[ courtesy Wikipedia 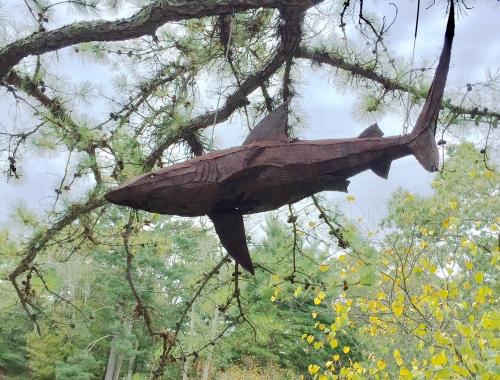 A lifesize, floating shark by Kitty Wales, Requiem (1997), hangs outside the Duxbury Art Complex. Made of steel and tin, slowly achieving a rust patina in the shore weather, this Caribbean Reef shark seems recently to have become a symbol–perhaps unintended–of the plight of marine mammals around the globe. Wales works from direct observation of nature, admiring the “grace and fluidity” of sharks, whose numbers have declined rapidly since the piece was made. The title is more relevant than ever.

My Nara Park sculpture collaboration with Joyce Audy Zarins is developing its final, brown patina. The park has thawed out, and the piece stands once again in a small catch basin pond, turning gently in the wind. The Acton-Boxboro Cultural Council will hold an unveiling on June 1st, at which time the piece’s title will be announced. The A-BCC will hold a naming contest among local schoolchildren. I’ll post more details as I know them!