The World’s Only Tire Sculptress

Sculptor Chloe Milton was known in her lifetime as the “the world’s only tire sculptress” but she was also a portraitist and World War II veteran who sculpted maps and other models for the US Army.

From 1940 to 1946, Milton was an industrial designer for Firestone Tire and Rubber Co. in Akron, Ohio. Her 1995 obituary in the Baltimore Sun states that she worked from “engineers’ drawings to one-thirty-second of an inch specifications” creating proposed tire treads for cars, trucks, bombers, and tanks.

In a 1943 interview, Milton commented “When the public admires a tire that I’ve sculpted, I and I see it on cars everywhere, I get just as big a thrill as any sculptor could.”

Milton studied in New York with the Clay Club in Greenwich Village. As a member of the American Designers’ Institute, she created portrait busts which were exhibited at the Corcoran Gallery of Art and are in the collection of the Firestone Library and other private collections.

These two small heads were sculpted by Milton in the late 1940s for a family friend, and recently cast in bronze. They are unsigned, but provenance is fortunately established by the children portrayed, now grown-up collectors of art and sculpture. Bronzes were cast at the Green Foundry, Eliot Maine.

A quiet and riveting work, Mona Hatoum‘s Exodus II from 2002 is a pair of suitcases joined by long strands of human hair. Hatoum’s family fled Palestine in 1948, found refuge in Lebanon, and thirty years later Hatoum was propelled into unexpected exile upon the outbreak of the Lebanese Civil War. Her work ranges from sculpture to installation to performance, thematically linked by intense emotions that cross countries and political boundaries, documenting lives torn apart.

Hatoum’s piece is a part of the powerful ICA Boston exhibit, When Home Won’t Let You Stay, which is closing soon on January 26th.

Love is Calling, from a Castle of Shed Tears

Yayoi Kusama‘s ICA Boston exhibit, Love is Calling, is an oddly tranquil environment in which Kusama is heard intoning her poem, “Residing in a Castle of Shed Tears.” The small mirrored room contains large tentacle-like fabric sculptures which slowly change color, at different rates and in a seemingly random sequence which becomes soothing rather than disorienting. A friend observes that being inside it is like scuba diving an exotic reef–both mesmerizing and sensorially acute. Kusama’s moving poem, which appears in English translation as wall text, is an ode to leaving all that one loves–a person, an emotion, or the World. 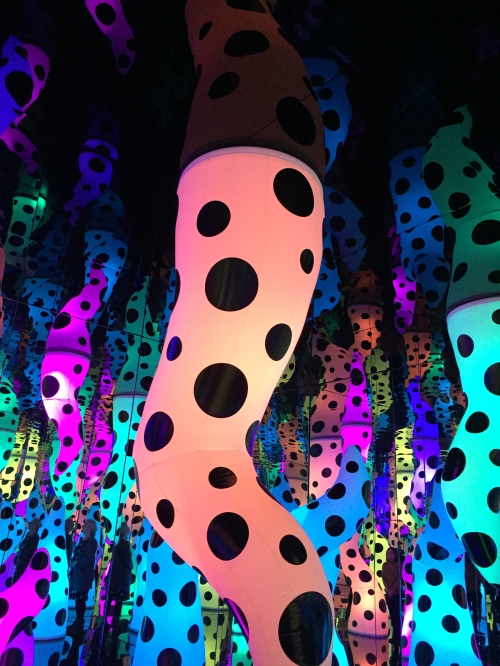