Still another pocket goddess: Isis with the Infant Horus

This tiny bronze sculpture (c. 1000 BC) depicts Isis nursing her infant son Horus. An iconic image in ancient Egypt, the pose alone reminded contemporary viewers of the goddess and her many legends, including the maternal devotion she exhibited in raising falcon-headed Horus, god of war. The main cycle of Egyptian myths involves the slaying of her husband Osiris, and his resurrection by Isis and her sister Nepthys: Isis was thereafter the protector of souls as they made their way through the underworld. Isis wears on her head the sign for “throne” and is often shown nursing Pharaohs as she nursed Horus. She is not only a pre-eminent deity of the Egyptian pantheon, but her worship spread to the Greco-Roman world as well. Only the rise of Christianity eventually quashed Isis. This tiny and beautifully detailed bronze is at the mfa.org #GoddessID

In ancient Greece, a Sphinx had a woman’s head; in Egypt, the creature is often androgynous, or male. The Great Sphinx of Giza, in Egypt, is one of the oldest sculptures in the world. It still generates mystery today because its human head has clearly been re-worked from a more ancient face.

In Greek mythology, Sphinx was the daughter of Typhon and Chimaera. She was said to have come from the most distant part of Ethiopia, and proposed her famous riddle (“What walks on four legs in childhood, two legs in adulthood, and three legs in old age?) as punishment to Thebans. Oedipus solved the riddle: “As a baby man crawls on all fours, as an adult he is two-footed, and as he grows old he gains a third foot in the form of a cane.” At this the Sphinx threw herself from the Acropolis.

A sphinx was often used on a grave marker or stelae of a young man, as in this headless Greek example from 530 BC in the Museum of Fine Arts.

A mix of styles, and some ancient Egyptian symbolism, decorate this household shrine to Astarte. Tiny in size but powerful in influence, Astarte perhaps watched the goings-on from a niche in the wall of her 6th-century Phoenician house. Made in terra cotta, this goddess looks like an everyday woman, albeit one with pet hippos (perhaps the maternal goddess Taweret) and googly-eyed Bes, protector of children. Now in the Museum of Fine Arts, Boston #GoddessID 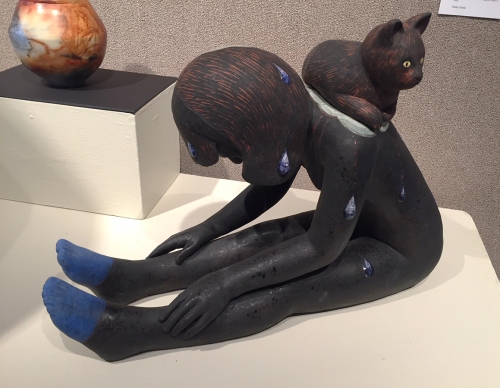 Curcio’s piece, hand built with underglazes, sgraffito, majolica, and oxidation, is relatively small in size —16x10x23 inches—but huge in presence. Curcio’s statement mentions that the impetus behind this sculpture was her despair at the state of current American politics. The bent woman, covered in gem-like blue and white tears, comforted by a watchful cat, is a symbol of deep sorrow.

State of Clay is up until June 3rd. 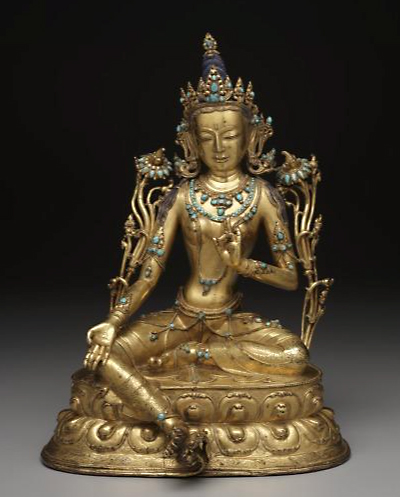 There are many forms and colors of Tara, each having different powers and offering different protections. The Green Tārā, (śyāmatārā) is associated with peacefulness and enlightened activity is the most depicted and the central aspect of Tārā from which others emanate. In her Green form, she is often also known as Khadiravaṇi-Tārā (Tārā of the acacia forest). Green Tara’s color symbolizes youthful energy.

Tara’s name means “star” or “planet” and therefore she is associated with navigation and travel both literally and metaphorically as spiritual crossing to the ‘other side’ of the ocean of existence (enlightenment).

This small and elegant 18th-century Tibetan Green Tara, in gilt copper alloy and turquoise, is from the Dallas Museum of Art

With apologies to Terry Pratchett (author of Small Gods, among many, many other books), here is a pint-sized and somewhat anonymous goddess, one of many in a case of painted terra cotta women. This eight-inch goddess, possibly Artemis (for lack of a better attribution, according to the nearby label), sits on a throne-like chair and was made in about the second century BC. She is beautifully and simply modeled; traces of her hands, hair, jewelry and clothing remain, delicately painted in red and black on the off-white ground covering the red terra cotta. The painting hints at what was once a lifelike presentation of a deity resembling a dignified matron of her era. She appears to be mold made—perhaps an inexpensive, ordinary goddess to place in a household shrine. #GoddessID 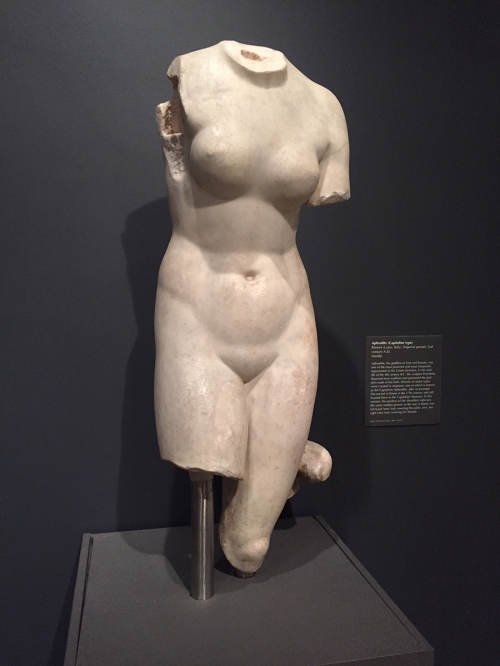 This life-size marble Aphrodite, from the Museum of Fine Arts, Boston, represents the Greek goddess of love and desire, counterpart of the Roman Venus. Viewed through the Roman lens, she is essentially assimilative and benign, and embraces several otherwise quite disparate functions. She can give military victory, sexual success, good fortune and prosperity. In one context, she is a goddess of prostitutes; in another, she turns the hearts of men and women from sexual vice to virtue.

Originally, Aphrodite would have held her right arm horizontally over her breasts and her left over her pubic region, a gesture that seems to have been a stock pose for sculptures of this goddess.

This piece is relatively recent, from the 2nd century A.D., though Aphrodite’s lineage goes back thousands of years. The combination of fertility and warfare is seen in the ancient Inanna. #Goddess ID

Boston’s Museum of Fine Arts is crowded with goddesses, and I’ll be posting pictures from a recent visit over the next few days.

This tiny and perfect bronze Nepthys is in the Egyptian wing. Sister of Isis, Nepthys accompanied the night boat of Ra through the darkness. She is usually represented with a headdress in the shape of a house since the literal translation of her name is “woman of the house,” which is not at all synonymous with “housewife.” Nepthys is a nursing mother, sometimes depicted as nurse to the Pharaohs themselves, and mother to the jackal-headed Anubis, lord of the underworld. A mortuary goddess, she is also in charge of festivals and beer. Like many ancient goddesses, her past is somewhat checkered, her roles are many and widely diversified, and well worth further reading.

The ancient Sumerian mother goddess Inanna has a complex history and a wealth of attributes which perhaps indicate her extreme age and longevity. Inanna was the goddess of war, combat, justice, and political power as well as love, beauty, sex, fertility, and desire. Her symbols were the lion and eight-pointed star, she was associated with the planet Venus. Inanna bargained with the lords of the underworld to retrieve a loved one, like Demeter; she stole the container of positive and negative aspects of civilization, like Pandora; like Juno she flew into divine rages and killed rivals. Inanna gradually merged with the sky goddess Ishtar; she was an influence on the Phoenician goddess Astarte who influenced the development of the Greek goddess Aphrodite.  It is recorded that Inanna was worshipped in parts of Iraq until the eighteenth century.

Photo: Fragment of a stone plaque from the temple of Inanna at Nippur showing a Sumerian goddess, possibly Inanna (c. 2500 BC)[ courtesy Wikipedia

Kiki Smith‘s Lilith is a lifesize bronze woman mounted on the wall, upside down or right side up (depending on the curator), her gravity-defying pose and white inlaid eyes signifying demonic or supernatural abilities. Associated with Inanna, or Ishtar, the Mother Goddess, Lilith in Jewish mythology may have been Adam’s first wife, although this designation is disputed. In Hebrew-language texts, the term lilith or lilit is translated as “night creatures”, “night monster”, “night hag”, or “screech owl.” Lilith is one of an ancient class of demons…perhaps once rulers or goddesses of the night. #GoddessID

Lilith in the Metropolitan Museum, NY