Smith College hosts the symposium “Real Lives of Women Artists” February 26-27, 2010. Visit their website to register, or for more information on the panelists (who include Lucy Lippard, Paula Cooper, Susan Hiller,  and Mierle Laderman Ukeles) http://www.smith.edu/artmuseum/symposium/students.php 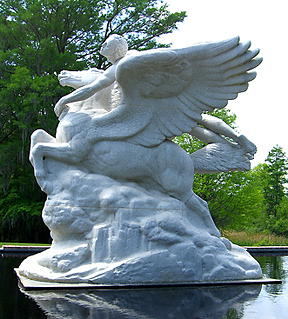 Laura Gardin (1889-1966), was the daughter of a wealthy and distinguished Chicago family. She grew up in New York, attended Columbia University, and studied at the Art Students League where she won both the Saint-Gaudens medal and the Saint-Gaudens Figure Prize. She married her sculpture instructor,  James Earle Fraser, and the couple built a large home and studio in Westport, Connecticut.

Laura’s career included many important medallic commissions as well as her better-known, heroic-scale figurative work. Her “Pegasus” (pictured) can be seen in Brookgreen Gardens. She modeled panels depicting the history of the United States for West Point Academy, and sculpted mascots of the Navy goat and Army mule.

James Earle and Laura Gardin Fraser, though inseparable, only collaborated on one sculpture project, the Oregon Trail Centennial Coin. “We talked and laughed all our lives,” Laura once said. “When we weren’t working we were talking, and we never grew tired of each other or ran out of subject matter.”

Many thanks to Lowell McFarland of Westport, Connecticut, for corrections and further information on Laura Fraser: http://www.findagrave.com/cgi-bin/fg.cgi?page=gr&GRid=42905366 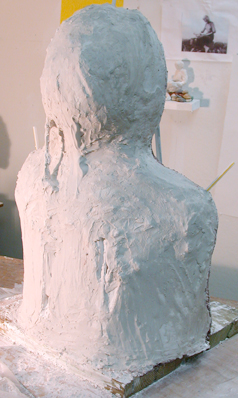 Now the hydrocal backup shell halves are complete, and all I have left is the tedious task of separating them (not so easy when you’ve basically created a vacuum!), cutting off the rubber “glove” shown below, and then cleaning up the big mess that’s sure to follow.

Here’s a photo of a new sculpture, in the first stage of moldmaking. I spent the weekend at Open Studios trying (and occasionally failing) to describe this basic moldmaking process, but here it goes again.

I’m making a reusable “glove” mold on this lifesize half figure. The figure was sculpted in a red earthenware clay (the color you can see through the greenish mold rubber), which I let dry to a leather-hard stage which stands up better to the rigors of the moldmaking process. Over the clay I spread several thin layers of Polytek’s Polygel 40 mold rubber. This mixes 1:1 by volume, a fairly forgiving mix for a plastic but this is thankfully typical of Polytek’s products. Since this is the first time I had used a gel rubber (actually polyurethane), I found that it hardened up a bit suddenly and I got stuck with several drips and a few untintentional gaps. Next time I will mix it with some poly-fiber (although the company says this is not necessary) to make a more evenly-spreadable resin in the liquid stage.

I then fastened a strip of cast rubber about 1″ x 1″ x 36″ around the top of the figure (cementing it on with more liquid rubber), which will ultimately form a dividing line for the two pieces of the hard backup shell. I added a wall of plastelina on top of this, making a fairly solid dividing line for the backup halves, which I will make in hydrocal.

After I make the hydrocal outer shell, I’ll remove it as soon as it sets up completely, then cut the seam line (that cast 1×1″ strip you can see running around the top of the head and shoulders) of the rubber mold until I can peel it off easily from the clay. Usually the clay original is pretty badly destroyed in this stage, but occasionally I can retrieve part for another use. Once I put the rubber halves, and then the covering shell, all back together again, I can fill the rubber mold with a number of materials: plaster, wax, cement, or polyurethane hard plastic.

Edith Barretto Stevens Parsons was born in 1878 in Houston, Virginia. She studied with Daniel Chester French, and at the Art Students League of New York where she won a sculpture prize and scholarships. She sculpted figures for the 1902 St. Louis Exposition’s Liberal Arts Building, and in 1908 showed her sculpture Earth Mother at the National Academy of Design. That same year she married Howard Crosby Parsons and built a studio on the top floor of their home. Her work changed its subject matter as her own children were born and posed for her sculptures, often holding ducks, turtles, and other creatures. Duck Baby, beginning a series of garden sculptures for which she is best known today, was the popular hit of the 1915 Panama-Pacific Exposition. The exposition handbook stated: “In the presence of so much that is weighty and powerful, the popularity of Duck Baby is a significant and touching indication of the world’s hunger for what is cheerful and mirth-provoking.” The same may be said of Turtle Baby and Frog Baby, which forms the centerpiece of the small works collection at Brookgreen Gardens, South Carolina.

Parsons also created portrait busts and public monuments including a World War I memorial in Summit, New Jersey, and a fountain dedicated to John Galloway in Memphis, Tennessee.